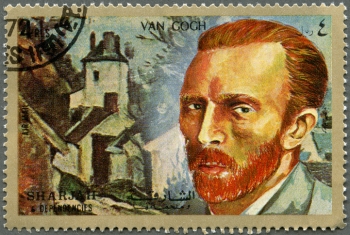 I didn't know that he sold only one painting during his career, seven months before his death. He was also a voracious reader. He wrote profusely as well, especially letters. Copies of some of his letters were on display. He was close to his brother, Theo, who supported his artistic endeavors. When I looked at one of the letters and observed the fine script, Mon Cher Theo, tears sprang to my eyes realizing how much artists need people who believe in them. Such intimacy felt with this deceased painter there in the museum with strangers milling about.

Van Gogh began his career first as an art dealer, and then as a minister--and not a very good one, according to his congregation, as he could be abrasive with people. At age 27 he moved from the ministry and became a full-time artist. He had no formal training. Although most of his contemporaries were creating dark, shadowy paintings, Van Gogh was attracted to bright colors and used them in this work, especially drawn to wide blue skies and flowers. Sunlight. Nature was his muse. Every place he lived, he brought prints of artists he admired and hung them on his walls for inspiration.

Pursuing artistic desires can feel lonely. Self doubt creeps in. The pathway forward is indistinct in the mist. When inspiration from other artists comes, it is a hand to hold as we move through.

As you embrace your pathway for 2020, let me be a voice that affirms you to follow your artisitic preferences. When I stop to think about some of the writing I'm most pleased with, it is work borne out of what I am most interested and passionate about, not what I believe I "should" be interested in or passionate about. Keep reading about and studying what you love. Don't compare yourself with others, but rather learn from the artists you admire. Enjoy the process.

I exited the museum and purchased cards with some of Van Gogh's prints and a photo of him. I'll tack them on my wall.

I feel that there is nothing more truly artistic than to love people.~Vincent Van Gogh

Tweet
Published in 2020
More in this category: « So That I Will Know Where To Walk Corridor Of The In Between »
back to top