Relief From The Vandal Horde 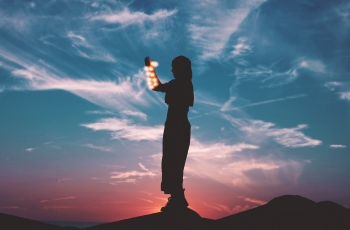 I opened the blinds at sunrise, the sky pink, the blush of carnations. Light streaming in like a shower of sequins. I wished I could feel as rinsed and fresh as that perfect sky. Yet my mind and heart felt fractured with jealous thoughts toward someone I did not even know, had not ever met. I'd been scrolling the internet and saw that a woman I'd had brief connection with via Instagram now had a book contract with a well-known publisher. She would no longer have to wade through all it took to self-publish. Instead of relishing her victory, I found myself jealous of her success, wanting what she had accomplished.

Then I found a story in II Chronicles that I'd forgotten about. King Jehoshaphat learns that a vandal horde is on its way to invade the land. First, the King calls the people together and reminds them to remember the past and all the ways God has supported them and helped them transcend multiple problems. We know that you will listen and give victory (II Chronicles 20:10).  I thought about all the ways this was true for me. God providing time to write and money and artists to help me publish. And readers. If you are reading this, you are an answer to my prayer, as I've asked God for your readership. How could I not be grateful for all He has done, not only as an author, but also in my personal life?

We're helpless before this vandal horde ready to attack us. We don't know what to do. We're looking to you, said the King. I felt like this, my own jealousy like the vandal horde.

Then Jahaziel, a man amidst the congregation, stepped forward, and moved by the Spirit said, Don't be afraid, don't pay any mind to this vandal horde. This is God's war, not yours...you won't have to lift a finger in the battle, just stand firm and watch God's saving work for you take shape. Don't be afraid, don't waver. March out boldly--God is with you (II Chronicles 20:11).

Then King Jehoshaphat did something that brought me hope. The King appointed a choir for God, dressed in holy robes to march ahead of the troops. They sang, Give thanks to God. His love never quits.

As soon as God heard the shouting and praising, He set out ambushes against the enemy. The vandal horde became so confused that they began attacking each other. When the King and his troops came up over a rise they were astonished to discover a field of the barbarians, all deceased by their own hands. God had given them joyful relief from their enemies (II Chronicles 20:20).

I could do this. I could recount the blessings and provision of God. I could stand firm and surrender my jealous thoughts to God. Let it be His battle for me. I did not have to be afraid, or waver in my belief that jealousy would not overtake me. I could sing, "Praise God from whom all blessings flow. Praise Him all you creatures here below. Praise Him above you heavenly hosts. Praise Father, Son and Holy Ghost." I could pray for this woman. "Bless her efforts, Lord. Give her your peace, prosperity and success, favor and grace to keep writing. May more people know of your mercy through her creativity and artistry."

The sun has risen now, its rays pouring through the window, warming my face. Jealousy slain.

BLESSING FOR WHEN DARK THOUGHTS APPEAR

You know the thoughts aren't right. Often they come at the most unexpected times.

You don't want to keep the darkness in your heart. But sometimes the thoughts can masquerade as friends. Companions whispering that you have a right to feel that way. I mean, look what he did to me. Do you know how much better I am at that than they are? And they get all the praise and glory? No way.

For a time, resentment and jealousy can feel like a balm. But then it doesn't. Because it spears you. Not the other person. They're going about living their lives.

May you inch away from the negativity--just enough to stand firm where you'll have better footing, a clearer mind. Where you won't waver. Don't be afraid. March out boldly. God is with you.

May you remember all that God has done for you. May you know that you are not helpless before the vandal horde. Go way back and recount His goodness, even in the rough patches. You'll feel better after this and you'll probably have moved a mile away from the negativity instead of a few inches.

May you now begin to sing. Sing something happy and postive. It doesn't have to be a hymn. God will hear and be so pleased to hear your voice of thanksgiving and praise.

May you experience joyful relief from your enemies. May you be amazed as you watch God's saving work take shape. May you know that He will listen and give you victory.

Tweet
Published in 2021
More in this category: « And For Now It Is Enough What You Notice »
back to top